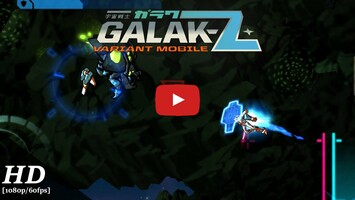 In GALAK-Z: Variant Mobile, you have to overcome missions that guide you through different adventures. You'll fight against space pirates and dangerous alien races that can be defeated using combat equipment; either giant robots equipped with huge riffles and laser swords or space ships with long distance arsenals and the ability to connect to other external gadgets. As an added bonus, everything is inspired by old-school anime with references to the works of artists such as Leiji Matsumoto and Osamu Tezuka.

As you start completing the different levels, you’ll start earning resources that you can use to upgrade your arsenal and unlock new elements to alternate with your other ones (although some missions requires you to use a certain type of spaceship).

Don't let the strange controls throw you off. You'll have to control your propellers with a button that’s next to the control stick, but you'll get the hang of it in no time. GALAK-Z offers a unique and fun concept that’ll immerse you in thrilling space battles that any sci-fi, space arcade and anime fans will love.
विज्ञापन